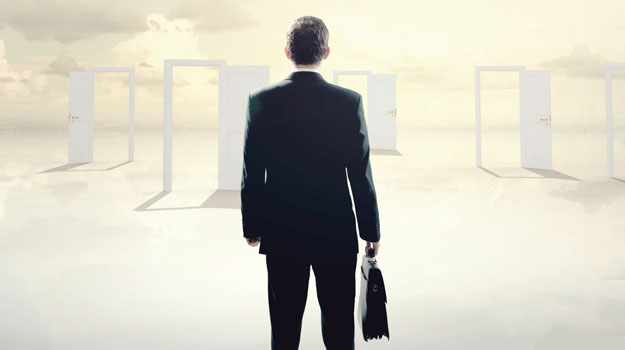 Forging a career in property is not all about working for the bigger players.The independents can offer opportunities too. And if you don’t fancy working for them, perhaps you should consider launching your own start-up.

“Our first deal was Moor Place – 167,913 sq ft – and it is stamped on my brain,” says James Townsend, co-founding partner of Kontor. “We went from viewing the building to signing within 10 days – it was quite a learning curve for a young guy leaving CBRE.”

That acquisition, like many of Kontor’s deals to date, was for WeWork, the $10bn (£7.5bn) shared workspace start-up which has been growing at break-neck speed. Townsend and Luke Appleby, both now 30, met four years ago while at CBRE.

Townsend worked in central London tenant representation; Appleby with landlords in the City and fringe.

Beyond WeWork, the firm has won instructions from tenants such as Propercorn and Runway East and it has recently secured its first instruction to dispose of space in Berlin. The instructions have enabled the firm to start hiring.

Looking back, Appleby admits the decision to go niche was “a bit risky”. But he says they were confident it could be successful. Both are convinced that proptech is going to shake up the industry, introducing transparency to a market whose opacity has long been a source of power for agents.

CVS began life in 1999 as a small, regional general practice surveying firm and trundled along nicely for a decade doing ratings, agency and building surveying. But in 2009, when the market was still spluttering out of the financial crisis, it set out ambitious plans to become the number one ratings firm in the UK. It decided to drop the security of having a number of strings to its bow as a general practice firm and focus solely on one service line.

“We took the view that there were opportunities for growth for a firm that was going to set its stall out first and foremost as a true specialist,” says chief executive Mark Rigby. “It was not going to see business rates as a complementary or bolt-on service, it would be set up to ensure that we would bring the best that we could afford from a resources point of view, expertise, technical specialism, etc, and build something that could become a market leader with all the attendant benefits that go for people who work for market leaders.”

CVS’s growth over the past six years vindicates Rigby’s decision. In 2010, the firm had a workforce of 90 people and a turnover of £8m. Since then, figures from EG’s Top Agents survey show growth in turnover from £11.8m up to £14.6m and then £22.4m last year. Today, Rigby says the firm has more than 300 staff and will bank revenues of £35m-£40m this year.

So far, CVS has won almost 800 instructions, averaging around 40 new appointments a week. And this early success of the new service line has left Rigby confident of future sustained growth.

“I would anticipate CVS doubling in size, not necessarily in people but from a financial perspective, over the next three to five years and doubling our market presence through the development of business rents,” he says.

But, like all expanding firms, the challenge lies in finding good people to help manage and fuel that growth. To breed a bigger pool of ratings specialists, CVS set up its Centre of Rating Excellence in 2013.

“We found that our appetite for growth was not going to be able to be serviced through the existing rating surveying community,” explains Rigby. “We needed to develop our own ratings surveyors. Bring people in, fully train them, give them case work to manage and deal with under supervision and with mentoring support.”

In 2003, when the retail market was dominated by corporates and consolidation, Mark Nash and Andrew Bond set up their own retail agency, Nash Bond.

“The market was dominated by the big six advisory firms,” says Bond. “In central London, there just weren’t many niche practices that focused exclusively on retail.”

“We felt there were more rewards to be had from running your own business,” adds Nash.

Today the firm is responsible for much of the identity of Sloane Street, SW1, securing Louis Vuitton, Prada, Chloé and Tom Ford as tenants.

The team says that if the company was a football club, it would be Barcelona rather than Chelsea – taking care to train its team members to make them the best, rather than buying them in.

“We have a 100% success rate on anyone taking the APC for the first time, and our graduate programme allows us to mould people to the way that we operate,” says Nash.

Those staff who have not been poached by other firms have the opportunity to make it all the way to director level.

Mayfair-based Lorenz Consultancy was set up in 2007. It employs just eight people but counts HSBC, Barclays, Sky and Bonhams among its clients, providing services including agency, rent reviews, development advice and dilapidations.

For founder Anthony Lorenz, life in a smaller firm has to be about providing a dedicated service. “If niche players are to survive against the mega firms, they have to be doing a better job,” he says. “Doing the job better is not turning up at the office at 9am and leaving at 5.30pm, it’s being dedicated to the business 24/7. If the phone rings at 11pm, you are back on it at 11.05pm. You are living your life to service your clients instead of coming in to earn your living.”

Working all hours, even when on holiday, might not sound like the perfect work/life balance, but for the real estate veteran, it is the only way to success.

And a duty of care is not just to clients. While Lorenz expects full commitment from staff, he also makes sure he is available as a mentor at any time, day or night, and is committed to turning his staff into experts.

“The learning curve here is steeper,” he says. “I pull in kids in their 20s and within two to three years they will know as much as a graduate who has been at a big firm for seven or 10 years. They are thrown in the deep end immediately. Everyone has me listening to their calls, watching their e-mails, correcting them, helping them 24/7.”

He adds: “The most important thing about team leadership is to make the people around you better than you are. Delegate upwards. Throw people into everything that they can cope with, knowing that if they need any help they can come back to you. Expand people’s briefs, expand their abilities, expand their skills, expand how well they do. There are too many bosses who don’t do that for fear of losing people.”

Last year, Malcolm Hollis was the surprise winner of EG’s National Adviser of the Year award. The firm was praised for being highly motivated and passionate – two attributes that make it a “fierce contender” despite its size, said the judges.

The firm rejected overtures from Capita two years ago which last year acquired GL Hearn. It set itself a target of doubling in size in two years and achieved it in one.

But for further growth, new areas need to be explored. This year the company has launched mergers, acquisitions and restructuring, leasehold advice and energy consultancy divisions. It is also looking to become a rights to light specialist, seeking to fill a gap in the measured survey market.

The firm opened its first European office in Madrid last September, its 16th office in total – and it will not be the last. Another in Copenhagen, Frankfurt or Amsterdam is planned, plus more offices in the UK.

Again it is about people. “We are a business about creating great opportunities for people, but we do not want to overdo the work side,” says Senior partner John Woodman. “We are very focused on wellbeing in the workplace. If you are a demanding business, you have got to get the other side of it right too.”

He adds: “We have a very flat structure. We are clear on what we are setting out to do. Everyone has a job and no one’s job is more important than another. Everyone knows their role in our business plan.”

Alongside bagging a coveted EG award last year, niche agency twentyretail boosted turnover by 139% and had more than 80% of its new business come through recommendations from existing clients.

It was the firm’s focus on its staff that helped persuade the awards judges to recognise twentyretail. There are frequent office outings – a recent trip to Marrakech to name but one – everyone gets the day off on their birthday, and all staff are paid to make sure they give something back to the community and do 20 hours of charity work each year.

Founder Richard Wassell says: “We try to find people who have the right skills to add to the business, and I think we have some of the best teams based on what we do. You do not need to have been to university – I think the main thing is that you really have to enjoy it.”