The power of fan mail 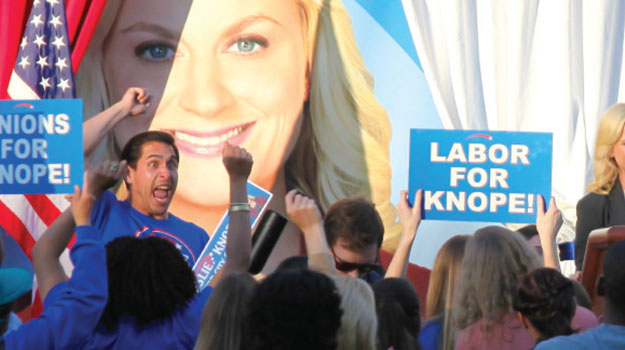 Looking to accelerate your career? US-based author Dan Ward explains why you should never be afraid to contact those in the industry you most admire – it may open doors...

I loved everything about the NBC sitcom Parks and Recreation – from Ron Swanson’s magnificent moustache to the way Rob Lowe’s character Chris Traeger misused the word literally in literally every scene. Amy Poehler’s portrayal of Leslie Knope, a mid-level bureaucrat in a small town’s parks and recreation department, was a perfect blend of optimism, naivety, cheerfulness, and relentless commitment to public service. It was the greatest television show in history. Literally.

One aspect of the show that stood out was Leslie Knope’s zeal for her profession. While she exhibited overthe-top excitement about all the various committees and task forces she participated in, including “the clean restroom task force, the handicapped restroom task force and the task force to reduce the number of public restrooms”, her most energetic responses occurred when she met the legends of her field.

She was understandably gobsmacked when she came face to face with first lady Michelle Obama, but her gushing enthusiasm for less prominent local government officials is what really caught my eye. The show played her enthusiasm for laughs, but if we look a little closer we can see it is a pretty good example to follow. Maybe not so much the tonguetied awkwardness of it all, but there is something admirable about her deep appreciation for the people who are doing great work. It is not just that she got excited to meet these people – it is that she knew who they were in the first place.

In any kind of job, from local government administration to commercial real estate, there are top performers, people whose contributions and achievements stand out. Do you know the names of those individuals for your field? Do you know how they got to where they are? What do they do differently than everyone else? What can you learn from their example? Most importantly, have you ever sent them a note of appreciation, a bit of fan mail to express your admiration?

I heartily recommend taking the time to drop a quick note to someone in your field who you admire, someone whose performance and contributions are noteworthy. To explain why, let me tell you what happened when I did just that.

You may not have heard of Don Norman, but where I come from he is an absolute rock star. An author, speaker, and influential design guru, Norman focuses on user-centric design and is the guy who coined the term “user experience” (UX). Like I said, a rock star.

I read his book The Design Of Everyday Things in 2004 and, at the risk of sounding like Leslie Knope and Chris Traeger combined, it literally changed my life forever. His latest book, Living With Complexity, blew my mind. Ten years ago I wrote him a note to say thanks and to let him know how much he has influenced my work. Then I had my very own Leslie Knope moment when he actually wrote back. That’s right, Don Norman answered my fan mail. I just about fell out of my chair.

We exchanged a few more e-mails over the years and at some point I mentioned a funny little concept I called “the simplicity cycle”. Imagine my surprise when he suggested I should write a book about it, then offered to introduce me to his agent to help get things started. I literally fell out of my chair again. His agent agreed to take me on as a client, one thing led to another and I ended up with a two-book deal with HarperCollins. Don Norman even wrote the forward to my Simplicity Cycle book. I never imagined a fan letter could lead to all this.

I have written several other fan letters over the years and they did not all lead to book deals, but that is not the point. When I wrote that first note to Don I was not looking for a favour or asking for an introduction to his agent. I simply said: “I like your work. Thank you for doing it.” No obligation, no request, nothing more than an expression of gratitude and appreciation. That’s pretty important. But that first note led to a conversation that developed into a relationship that opened some big doors for me. It literally changed my life, and I do mean literally.

Take a moment today to look around. Find someone who is doing good work and let them know you noticed them. At the very least, you will make someone feel good, and you never know what else it might lead to.

Dan Ward is a frequent contributor to Estates Gazette and is the author of The Simplicity Cycle: A Field Guide To Making Things Better Without Making Them Worse and F.I.R.E.: How Fast, Inexpensive, Restrained, and Elegant Methods Ignite Innovation. He served in the US Air Force for more than two decades researching, developing, testing, and fielding military equipment. He is a cybersecurity fellow at the New America Foundation and a senior associate fellow at the British Institute for Statecraft. Contact him at www.thedanward.com